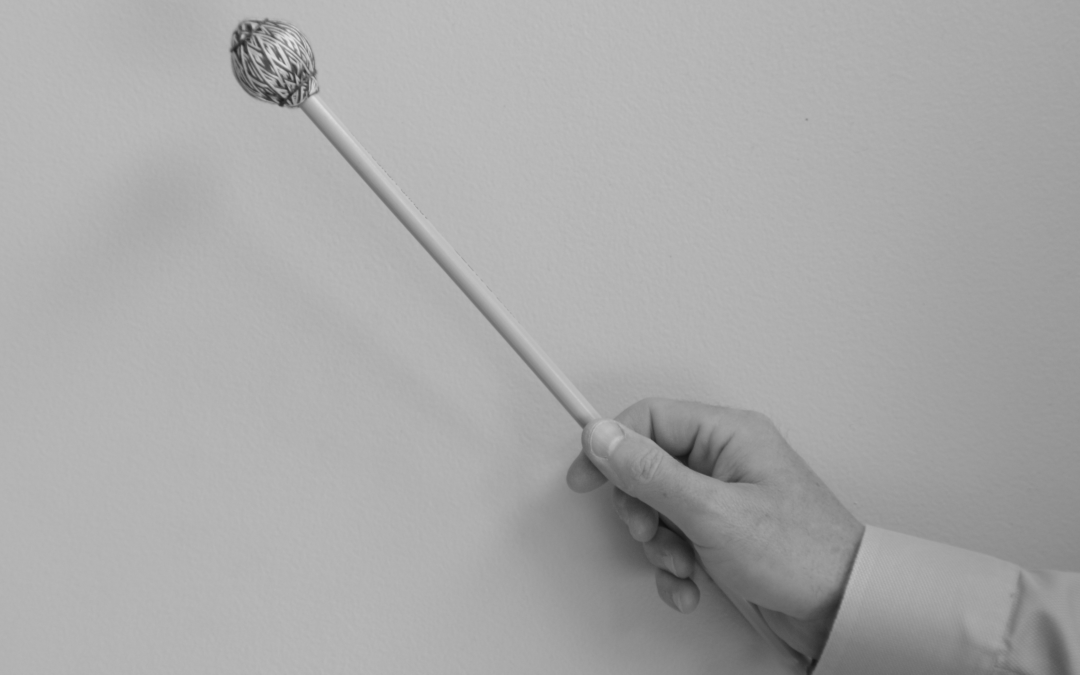 “Typically a musician develops this in their mid-30s when you’re well into your career where you’ve dedicated your life to your craft and your art and you find it slipping away.” —Billy McGlaughlin, guitarist

In early 2005, I was playing Parcours en Duo for vibraphone, timpani, and baritone saxophone by French composer Edith Lejet. My friend John Bleuel and I had been rehearsing intently for weeks preparing for our performance at the University of West Georgia Saxophone Symposium, where he taught saxophone.

One day during rehearsal, I noticed something was wrong in my left hand while playing two-mallet vibraphone. My index finger kept coming off the mallet shaft involuntarily, breaking my fulcrum. It felt like my middle finger was forcing my index finger off the stick, as if there was no room for both. There was no pain, but certainly a lack of control and uneasy feeling.

Over the next few days, I continued to monitor my left hand. I started noticing my index finger also coming off when playing matched grip snare drum and timpani rolls but interestingly, not four-mallet playing. I tried some creative measures like rubber banding my fingers to the stick, but nothing kept them there. I became concerned and my playing started to suffer. At the time, it affected me most teaching private lessons and giving some high profile clinics at Florida State University and our state PAS Day of Percussion.

The Diagnosis
After several months of research and searching for answers, I was diagnosed with task specific focal dystonia (TSFD), meaning the condition only occurred when playing percussion with two sticks or mallets in my hands and not during activities like typing, writing, or swinging a golf club.

According to the Dystonia Medical Research Foundation, “Dystonia is characterized by persistent or intermittent muscle contractions causing abnormal, often repetitive movements, postures, or both.” Could it be, I asked myself, that I developed dystonia because I practiced too much? According to The Dystonia Society, “Dystonias affecting the hand are often caused by performing repeated hand movements. They can affect any profession which requires repeated movements but are more common among musicians than any other professional group. Research has identified musicians who have intensively practiced their instruments over a number of years are a group most affected by this condition.”

With practice pad and sticks in hand to show the doctors, I visited a chiropractor who tried acupuncture and a TENS-unit (Transcutaneous Electrical Nerve Stimulation), Emory University for Botox treatments, and a hand specialist who prescribed medication, all common treatments for TSFD to relax the muscles in my left hand and arm. Nothing worked. I decided to take some time off from practicing and thought getting away from it all would do me some good, but in the end had no effect. My only option, I felt, was to find another way to hold the stick.

Learning to Compensate
In my early research, everything I read about dystonia described it as a “neurological movement disorder” and that “a neurologist who specializes in movement disorders is the most appropriate physician to treat hand dystonia.” Although there were treatments like Botox and medication, there was no cure. For the most part, I kept the condition to myself because I was embarrassed, feared for my job, and could not play at the level I was accustomed to. I simply had no control over my left hand grip.

After several weeks of experimenting, I discovered my fulcrum would stay intact only when I took the middle finger off the stick. My choices were to play with my fulcrum only (with the back three fingers essentially sticking out), or to play with a fundamental grip without the middle finger. While these options were not ideal and quickly led to fatigue in my hand and fingers, I managed to play at a respectable level.

Throughout the process, I kept thinking about the age-old debate between traditional versus matched, Stevens versus Burton, and the fact that if there was a screen in front of me, no one would care. However, I was a teacher and had to lead by example. I had to demonstrate to my students what a professional percussionist looked like when holding two implements in his hands. I felt like a hypocrite.

Finding a Cure
For over a decade, I accepted my dystonia and took comfort in the fact that it did not get worse. In 2015, I attended a dystonia support group outside Atlanta, only to witness first-hand how devastating dystonia can be in people’s lives. My story of “not being able to play drums with matched grip” paled in comparison to the men and women sitting around the table who were wheelchair bound, struggled to move freely, and needed assistance with daily tasks.

Then in spring of 2016, I received an article from my former professor, Gary Cook, about a drummer in New York City named Shaun Lowecki, who had a case of TSFD that included tremors. According to Shaun in 2011:

“I had lost all control of my right hand. I was panicked and didn’t understand why I couldn’t move the way I used to. I had intense involuntary spasming which worsened with frustration and anger. I experienced aggressive clenching and compulsively contemplated my fulcrum. I developed severe fear and anxiety and I began searching for an answer. I spent the better part of this year seeking out specialists to help find a solution. I saw a chiropractor, worked with an acupuncturist, visited an orthopedic doctor, had massage therapy, attended a physical therapy course…and nervously searched the internet for an explanation. Unfortunately none of the specialists I saw had an answer for the spasming or loss of control.”

During his battle with dystonia, Shaun connected with Jon Gorrie, a professional trumpet player, author of Performing in the Zone, and performance coach on “the prevention of and recovery from Musician’s Focal Dystonia (MFD) in players of all instruments.” His website, musicians-focal-dystonia.com, offers excellent resources including an online forum, free webinar, Skype coaching, and blog featuring practitioners of Gorrie and MFD. Under Gorrie’s mentorship, Shaun learned that the condition was not so much a neurological disorder, but an emotional one. I contacted Shaun on Facebook and asked if we could schedule a lesson on Skype.

The goal of the lesson was to retrain and relearn how I think when I play. I had to change my focus, let go of control, and trust that, deep down, I already knew how to play everything. Following the lesson, Shaun sent me a link to an excellent YouTube documentary called, Focal Dystonia: Understanding and Treatment as an Emotional Condition. The mastermind behind the documentary, which takes place in Madrid, Spain, is a man named Joaquin Fabra. According to Focal Dystonia: A Musician’s Resource, “Fabra is a trombonist/euphoniumist who was struck with focal dystonia many years ago and managed to rehabilitate himself completely. Fabra believes that focal dystonia is a behavioural disorder and not a neurological one.” For over twenty years, Fabra has been treating musicians who have traveled from all over the world to see him in search of a full recovery.

Through Fabra’s instruction, I have learned to “pay attention to the person I used to be when I enjoyed playing the instrument, not to fight against tension, and that doing it wrong is OK” (this last point is especially tough). I am trying to “shift my focus on playing freely, rather than on not playing badly” and “loosen mentally and physically.” I am learning to “trust myself, have a positive mindset, and accept that the tension will be there, even though I am not interested in it. I am only interested in “the idea of playing the instrument.” Fabra says, “Take responsibility for your dystonia. In a bizarre way, you chose to have it. You can also choose not to have it, by changing the way you think and emotionally feel about yourself.”

Beginner’s Mindset
While working on Shaun’s and Joaquin’s practice strategies, I came across an excellent website by Rob Knopper, Principal Percussionist of the Metropolitan Opera Orchestra www.robknopper.com. One resource in particular struck me called, “How to Develop the Perfect Snare Drum Grip.” In it, Rob provides a video and five diagrams of the hand, showing exactly how he holds the sticks when playing loud singles, loud rolls, soft singles, soft doubles, and soft rolls. I started studying these diagrams carefully and tried modeling my grip after his, all with a beginner’s mindset. By learning to hold the sticks again from square one, I was retraining myself to play. What I noticed—and continue to notice—is that the physical change in my grip, in conjunction with the mental and emotional skills I learned from Shaun and Joaquin, have resulted in moderate improvement in my playing. According to Shaun:

“Over the course of my rehabilitation I learned many techniques to deal with the ups and downs of dystonia. I had to retrain the way I approached drumming on a physical, mental and emotional level. In conjunction with my mentors, I discovered my own approach which ultimately led me to a full recovery. There were times when I wanted to quit. There were times when I doubted I’d ever improve. There were times when I couldn’t handle the intense emotional roller coaster. But looking back on the struggle, I can say that I am grateful. I have become a stronger player because of dystonia and look at it as a positive experience.”

Despite playing different instruments, their stories are eerily similar, with dystonia failing to discern they are at the top of their game in the music world. After reading their stories, I immediately felt a shared bond with them. We are part of a club—a fraternity—who experienced confusion from the symptoms, shock from the diagnosis, and fear from not being able to play again—at least not at the level we want or need to play to do our job at the standard our audiences, students, and music deserve.

Author JJ Virgin said, “You grow when you’re challenged and you’re never better than when you’re challenged.” I have taken this mindset to heart and for the first time in over a decade, I am hopeful. There are musicians, including drummer Shaun Lowecki, who have fully recovered from task specific focal dystonia. Why not me? My ultimate goal is to play better than I did before, and I firmly believe this is possible—with practice, trust, and the help and support of all those who stuck with me during this process.